I often see analyses of memes focus on their objective dimensions and their theoretical qualities, e.g., semiotics, cultural ecosystem, and so on. What I have here is a modest proposal to talk about the more obvious quality of memes as microexpressions of how we think about character, narrative and imagery. This is about when memes act as images of human action.

To get a sense of this way of looking at memes, I would like us to do an exercise. What I have done is take a few memes that I intuitively associated with each other, and compared and contrasted them to highlight their features. I then constructed theoretical categories based on their narrative action. By focusing more on these conventional readings of these “images,” one could make more informed creative decisions; after all, these conventions act for creators as logical boundaries of what makes a meme good and what it could be. 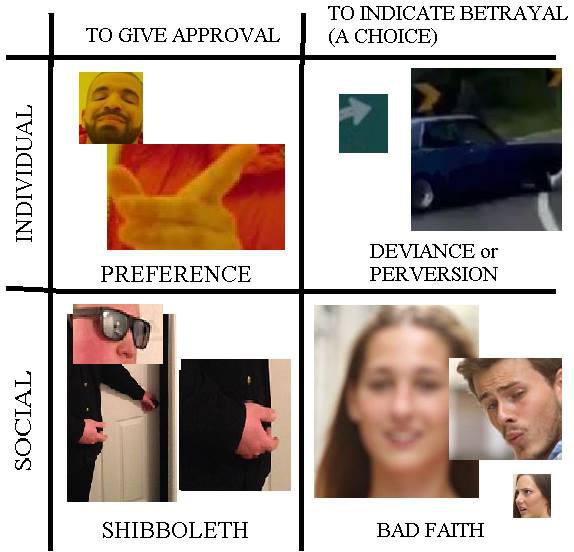 This is the chart I have constructed for the exercise. Let us see whether one could by demonstration make a convincing case at all for reading a meme like a scene.

In the first column, we have approval-type memes. These primarily indicate preferences and approval. They exist normally in a comparative format, with two parts constructed, each one signifying a different psychological state in the protagonist. And the negative part precedes the first part. Here are some examples: 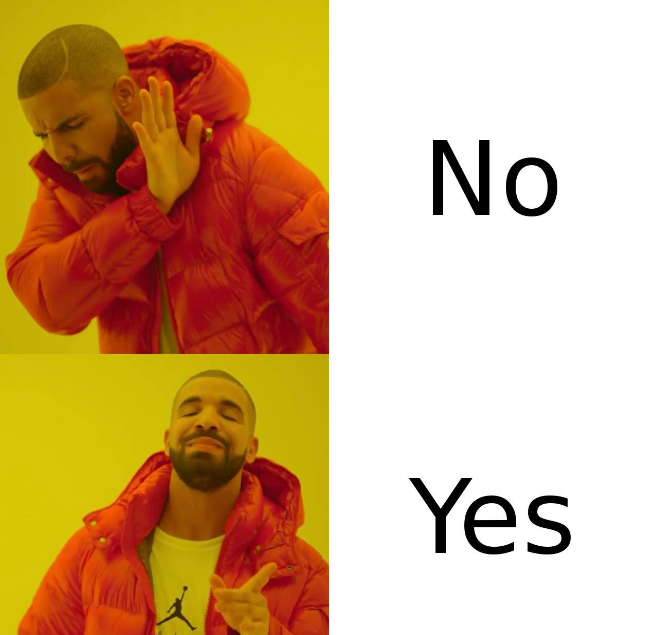 This image only has two things we can read: Drake’s identity and his body language. His identity might be utilized as a part of a joke, but most iterations focus on his body language. This is a semantically clean and simple meme. Drake No signifies disagreement and aversion, while Drake Yes signifies agreement and approval. Drake Yes can also convey the witnessing of rectitude. 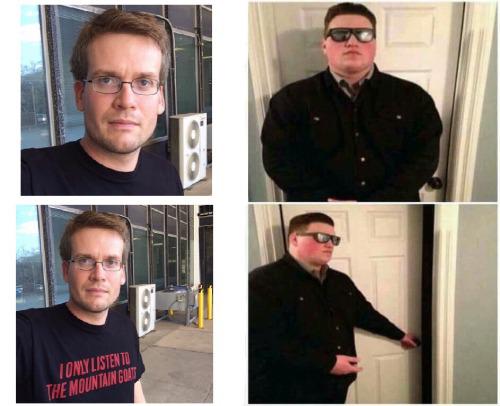 Two major symbols: a closing and opening door, and a guardian. This person would be conventionally identified as a bouncer. Bouncers often act as arbitrators of social status, reserving entry to certain individuals. This carries over to the use of the meme. It is often used to compare the impressiveness of two objects. Another difference that exists between this meme and DRAKE YES, DRAKE NO is that the first image of the bouncer doesn’t signify an active disagreement, but rather an initial resting state and a lack of agreement.

In the second column, we have Choice-type memes. While approval type memes are introspective, indicating the value of objects through the psychological states they elicit, choice type memes are more behaviorist, focusing instead on an agent, a situation and an action. Rather than giving us a psychological range, they situate their protagonists. Sometimes the joke is the situation itself, and sometimes it is the protagonist themself and their character.

This might get a little messy as this type of meme can be sub-divided further into three kinds. 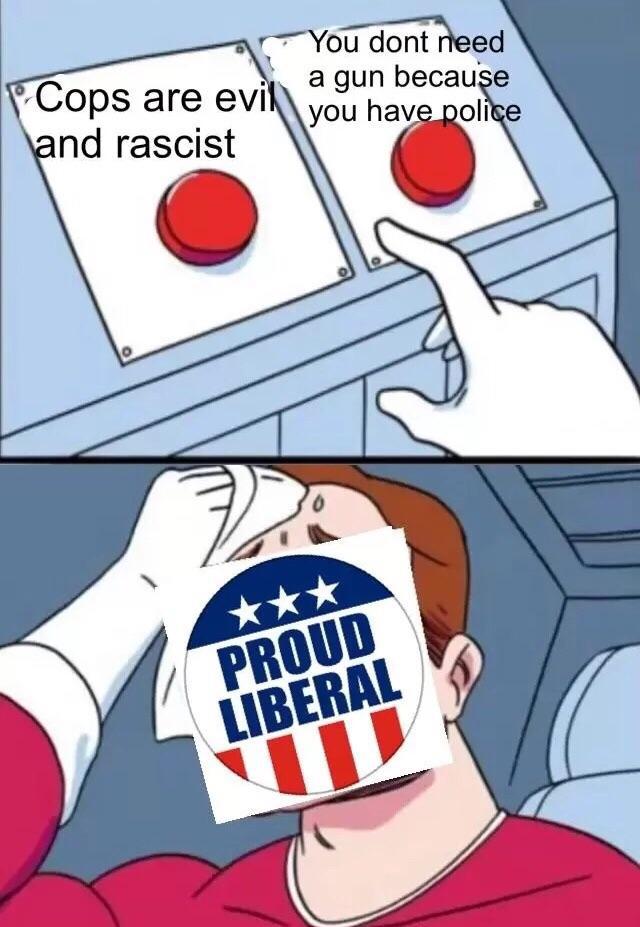 The first kind are dilemma memes, memes wherein the central joke is the presence of an irresolvable contradiction between two interests or beliefs. Above, we have the DAILY STRUGGLE meme which exemplifies this narrative. Sometimes, the joke becomes about the sort of individual who hold those beliefs, or might experience the dilemma. In that case, the humor is a matter of ridiculing people rather than a sympathetic experience of human contradiction.

The second and third kind are about the choice/s presented, and about the decision made between the presented choices. In the former, the choice itself is posed to the reader; he is the protagonist roped inside the encounter. In the latter, the joke is the decision that has been made already, and it is often a bad or ridiculous one; this kind is what I have included in the chart above. Like dilemma memes, if memes about ‘decisions made’ aren’t sympathetic (as in encouraging personal identification or self-deprecation), it is then used for ridicule.

Here, are some examples of the kind that presents choices to the reader: 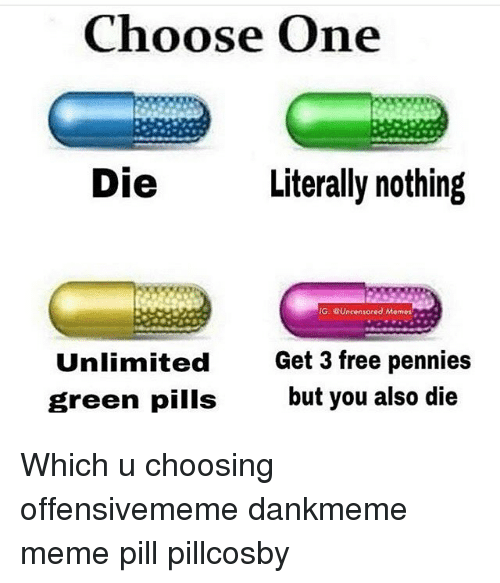 Different coloured pills with different effects are laid out in front of the reader. 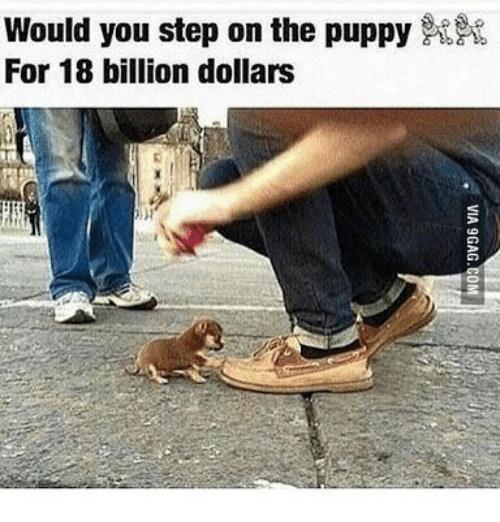 WOULD YOU DO X FOR A BILLION DOLLARS?

The first iterations of these were intended as a serious question of character, interest, and value. Personally, I find the ironic iterations are more entertaining. I couldn’t find an example of that through Google, but I saw a few of those on Facebook. Those iterations are usually deep fried to help highlight their absurdity, asking questions like “WOULD YOU SIT ON A CHAIR FOR A BILLION DOLLARS?”

I have not yet shown an example of the third kind, but it is worth pointing out now that all three kinds follow noticeably a trend that believes that bad judgment pays dividends in comedy. Narratives about dilemmas, for example, are about flawed reasoning and contradicting beliefs. In the choice/s presented kind, the choices often become ridiculous, nonsensical or downright opposed to well-being, suggesting that the reader’s judgment is being addressed facetiously. In the decision-made kind, which I will show, humor is predicated on the idea of having betrayed one’s good sense. That is why in the chart I constructed above I labelled this kind as “to show betrayal.” Here are examples about the decision made, notice how they play out this narrative of bad judgment: 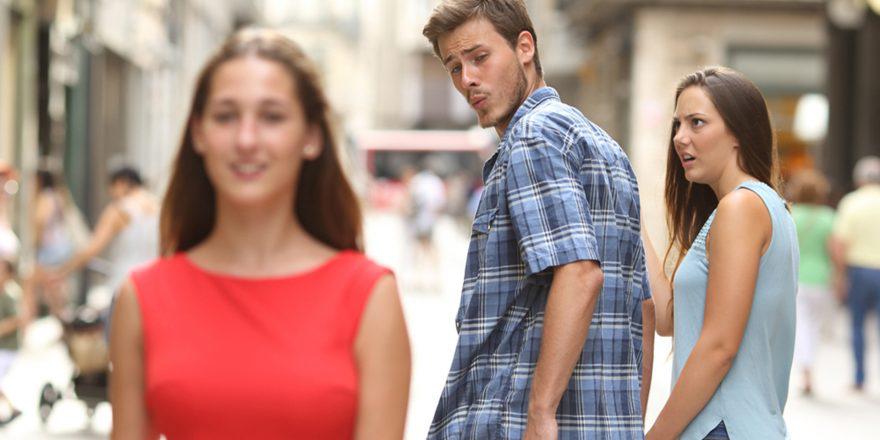 The narrative here is complex: one can either focus on the character of unfaithfulness, or distractedness, or simply being lured something by a more attractive alternative (think of the phrase “ooh shiny!”). You could then logically use this to show defiance of expectation, tradition, etc. But it can also be used to show unfaithfulness to commitment and personal responsibility. 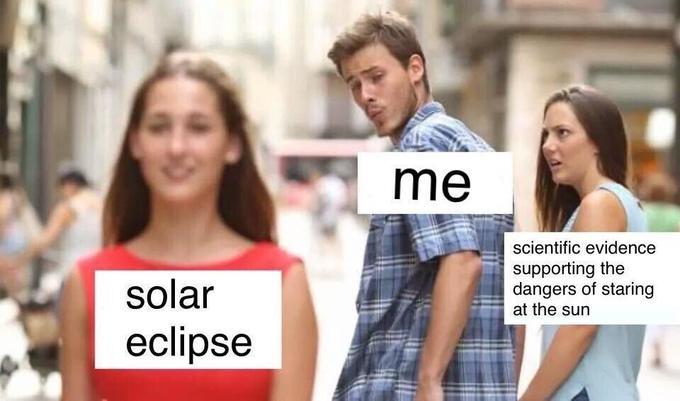 A demonstration of bad judgment. 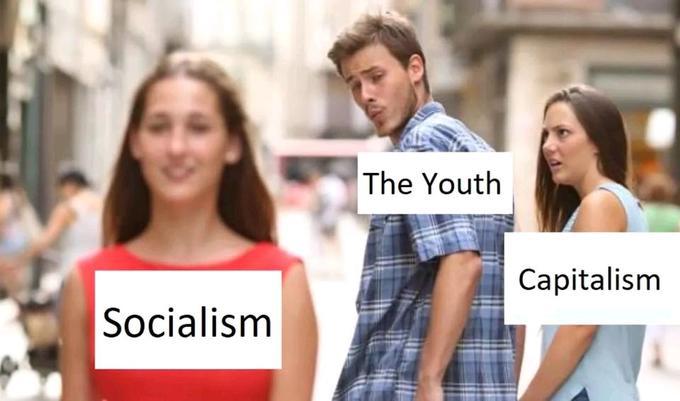 Attraction to a better alternative. Unfaithfulness to tradition, to what exists. 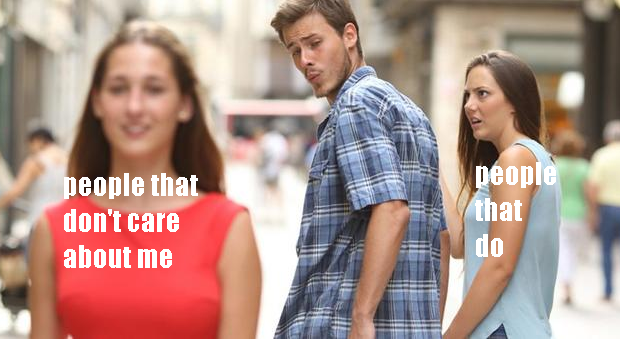 This is an example I constructed about bad judgment. 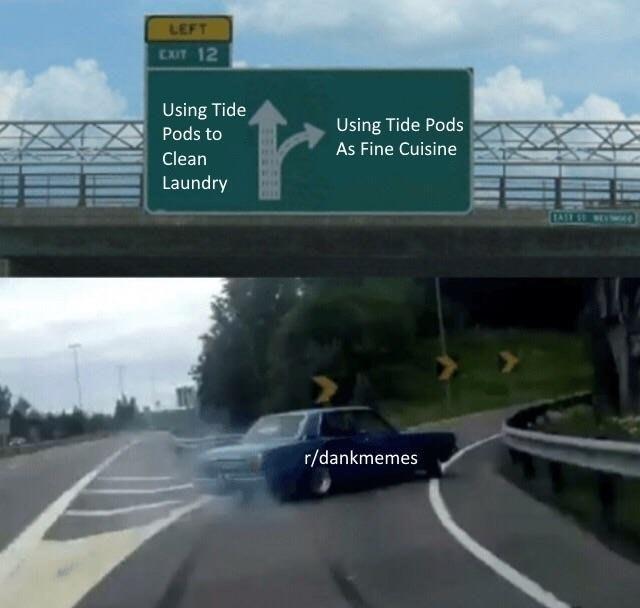 The lack of facial expressions, body language, and social context makes this template more generic. However, it still often follows the trend of narrating bad judgment. In this case, the abstract concepts of “a straight road” and “a crooked one” come into play. Interesting note: the entire highway exit sign is photoshopped on a screenshot from a Youtube video called “How to exit freeway like a boss.” So, there can sometimes be this sense of “Why do that when you can do something cooler?” Which is something that plays into the narrative of coolness’ relation to bad judgment. The swerving car I believe helps creates this sensation of losing control, of not having the proper stability. 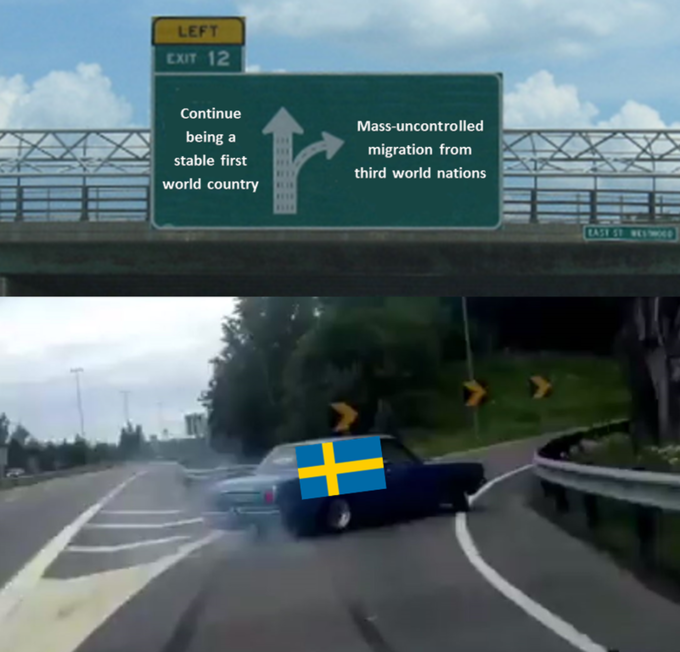 This meme is used to ridicule certain political decisions. 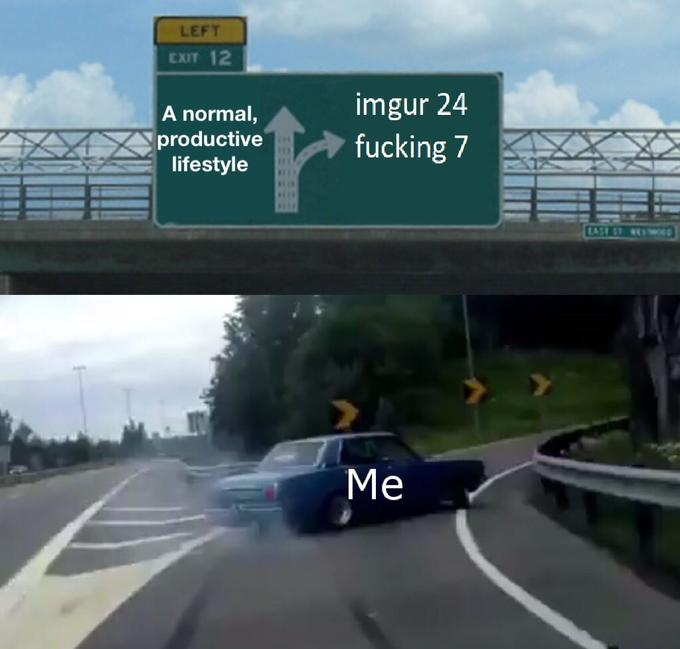 The continuing narrative of bad judgment. 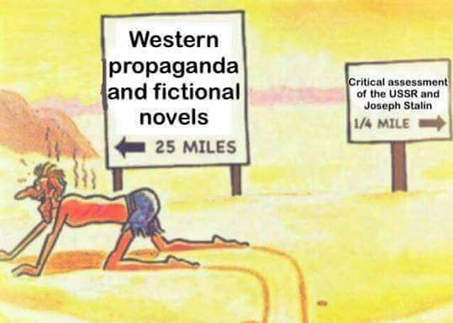 I couldn’t find what this was called. The basic narrative here is two-fold: (1) that the protagonist chooses a farther alternative than a nearer one (“that’s how good it is!”); (2) that the protagonist foregoes his ordinary thirst for a larger one. Often this second narrative is about putting over personal desire above actual necessity, which follows the logic of bad judgment. But because of the metaphorical connotations of a “larger” thirst, this meme can very easily move away from a depiction of good and bad judgment and move towards a simple expression of personal desires.

This meme is no longer about judgment, but a simple comparison of desire. One alternative is more difficult to reach but the protagonist is completely willing. 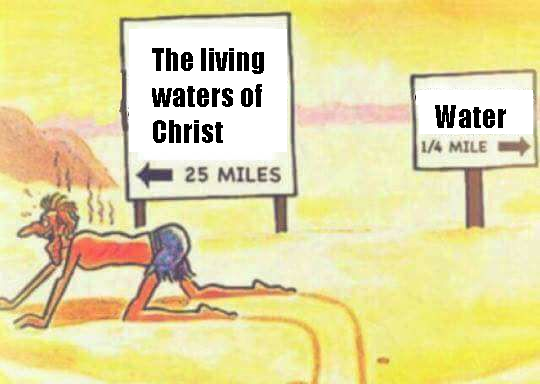 This example I constructed shows a narrative that is no longer about poor judgment, but gratitude and a sincere belief in spiritual salvation. This could be read differently by a skeptic, which he could see as bad judgment.

And we’re back to a depiction of bad judgment. That can’t be helped because the function of this meme is ridicule.

You will find also find that because these decision-made memes are about character choice, these memes will visually express this idea using a shorthand of left or right. You will be able to trace an invisible dividing line running down the middle, which is often the space occupied by the protagonists themselves. 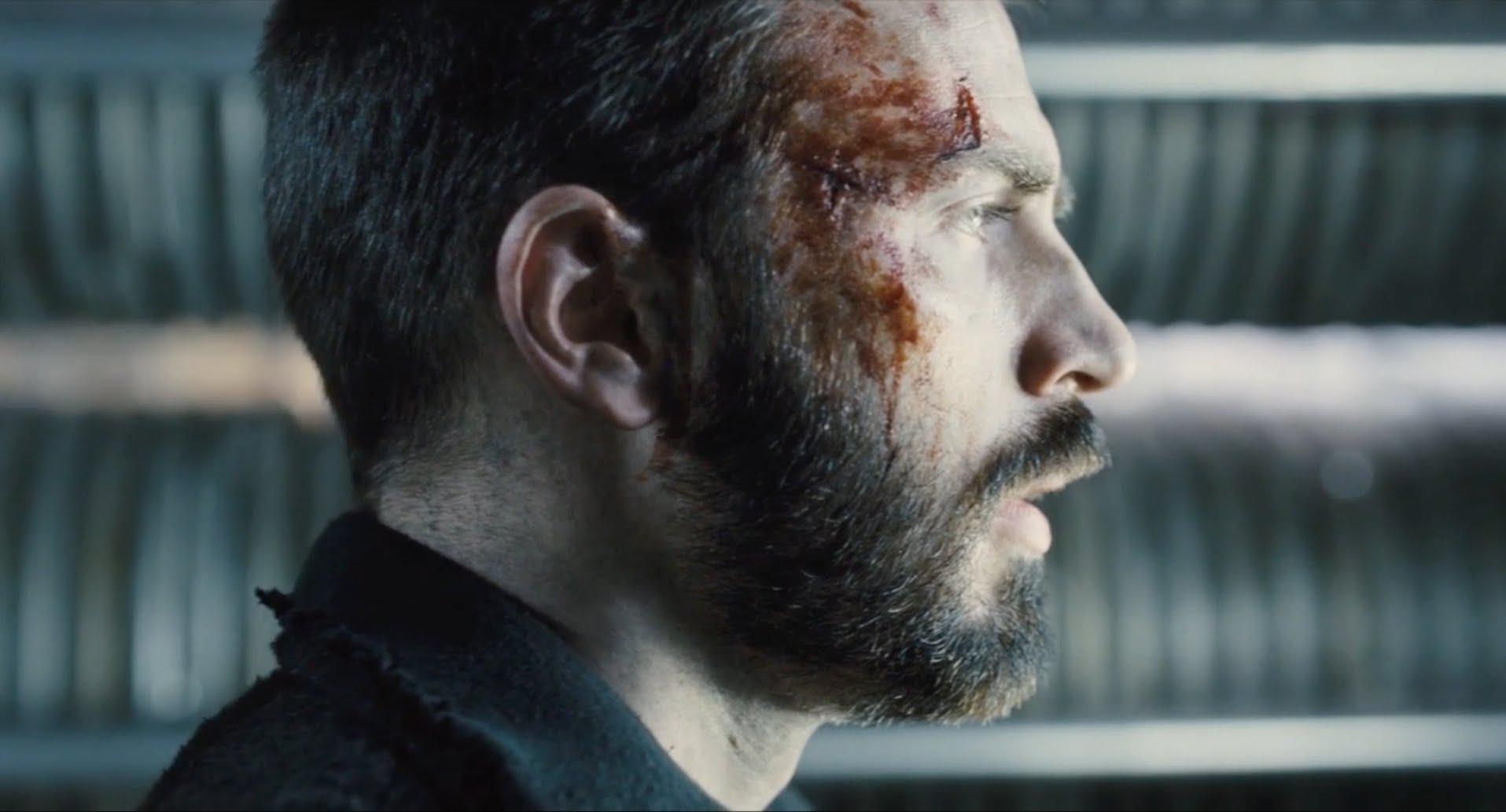 For example, the Youtube channel Every Frame a Painting describes the cinematography of Snowpiercer (pictured above) as utilizing this to focus the narrative and characters. Throughout the movie, the left part represents the back of the train, while the right part represents the front. For the main character played by Chris Evans, the choice between left and right is a question of maintaining the status quo and pushing forward with revolution. What we have to the right are the unknowns he feels he has a duty to realize, while behind him to the left is everything that keeps him safe and makes him feel human.

But, the shot from Snowpiercer is missing another visual characteristic present in memes about decisions made. That makes sense; Snowpiercer’s logic is of dilemmas, and the sense of being carried forward at whatever cost. It is still ongoing. And it has over an hour to tell the story. On the other hand, memes about the decision made are after the fact. The stories they tell us is, instead, done through the lens of hindsight, and examines character and irrationality. And they can usually only tell this in a single image.

This narrative requirement is visually accomplished by framing these two choices unequally. In the case of memes which reframes images, they will often try to use images that have this unequal framing beforehand. This visual differentiation helps convey the sense of being “decided.” Think of how a scale judges the weight of two objects, physically shifting to indicate the relation between the two. An unequal scale is a decided scale. It has passed its judgment. If you look at the previous examples, you’ll notice this principle. Here’s an example of an image which follows this description, so I turned it into a meme: 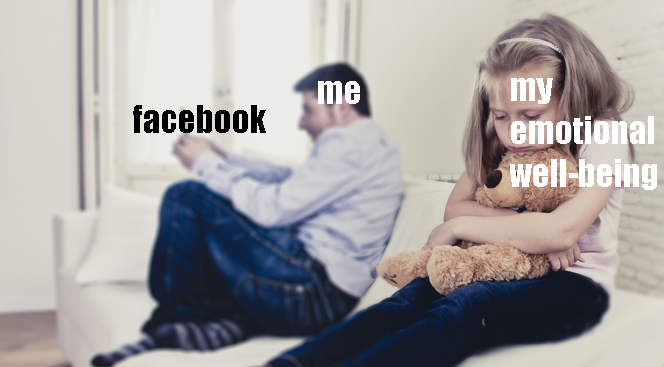 Notice the element of being “decided,” being irreversible like the child neglect. Notice the poor character we would attribute to this kind of behavior. This is a perfect example of the kind of meme I have described. 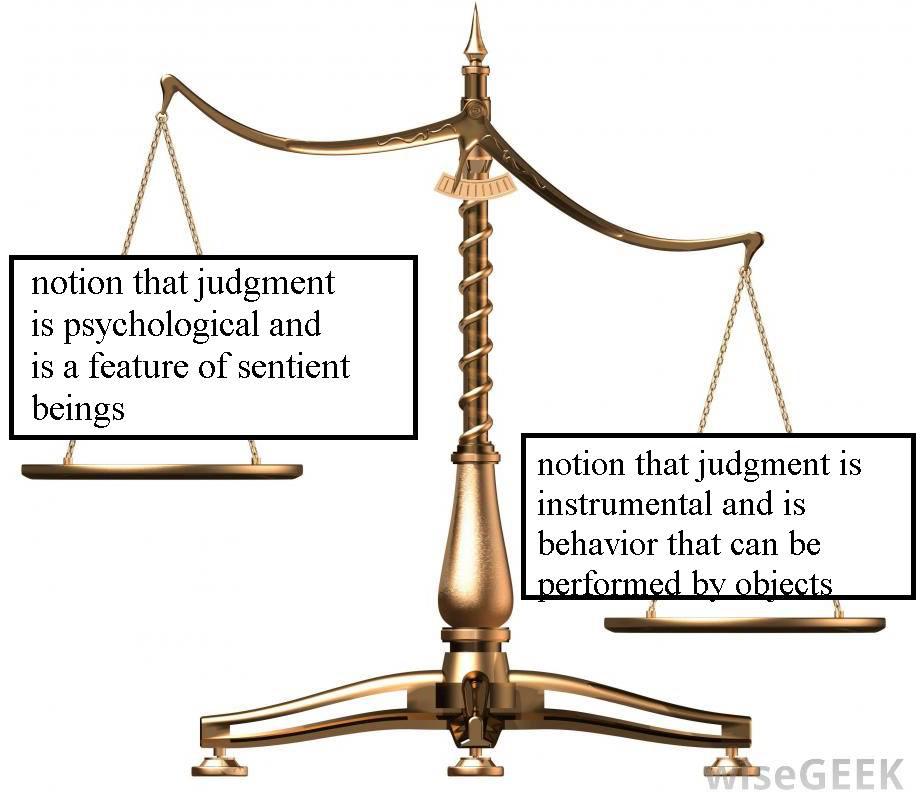 Notice how there’s only one object in this image, no character and situation - and yet not only are choices conveyed, but judgments, inequalities, and decisions as well. The visuals convey the sense of being decided. But, don’t use this as a meme just yet. It doesn’t lend itself well to the narratives we discussed. This image is about an inanimate object and is missing the connotations of irrationality, desire, control, etc. which is part of the large appeal of many memes. 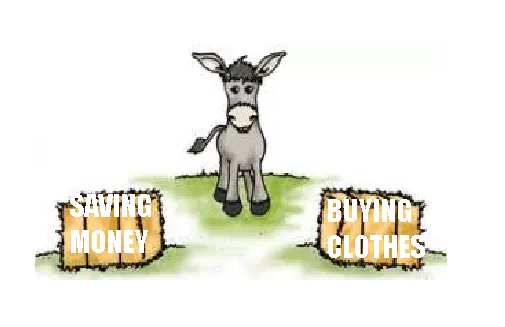 Now, here’s another example: Buridan’s ass. Here is what happens again when there is a lack of visual differentiation between the two choices, a lack of visual decidability. Like the shot from Snowpiercer, or DAILY STRUGGLE, it reverts back to a narrative about dilemmas.

Now, here is an a demonstration of what this visual decidability can do with other things. In this CHOOSE ONE PILL meme, one choice is qualitatively different and this is helpfully signalled by the use of a different font: “This is the right answer!” It is this difference felt by the reader, which suggests the action, the quality of being “decided.” This shifts the CHOOSE ONE PILL meme, which is ordinarily about the choices presented, into a joke about the decisions made. 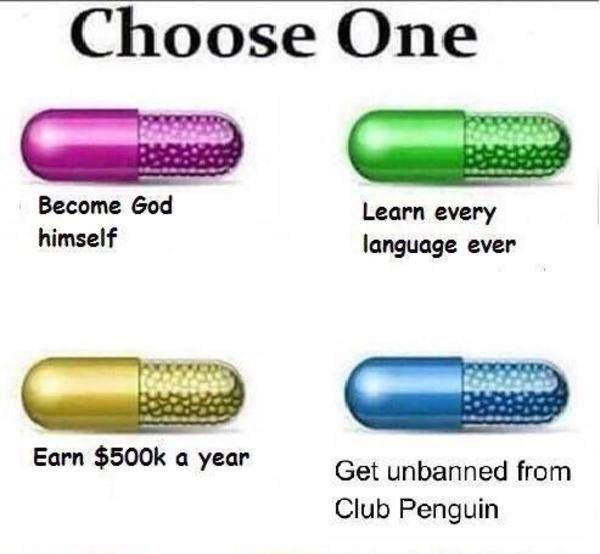 This narrative quality of being decided produces an ellipsis following this meme, because this effect is invisible, something only felt by the reader. Like a vignette from Hemingway, the narrative it forms is larger than what it has on the surface. The narrative and feeling can be concretized by adding the following image to fill in the blanks: 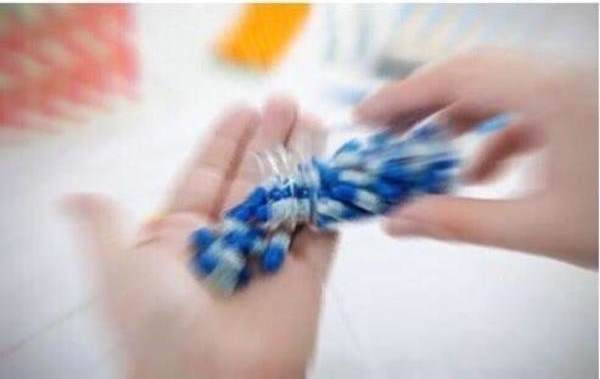