Memes Are Not Jokes, They Are Diagram-Games 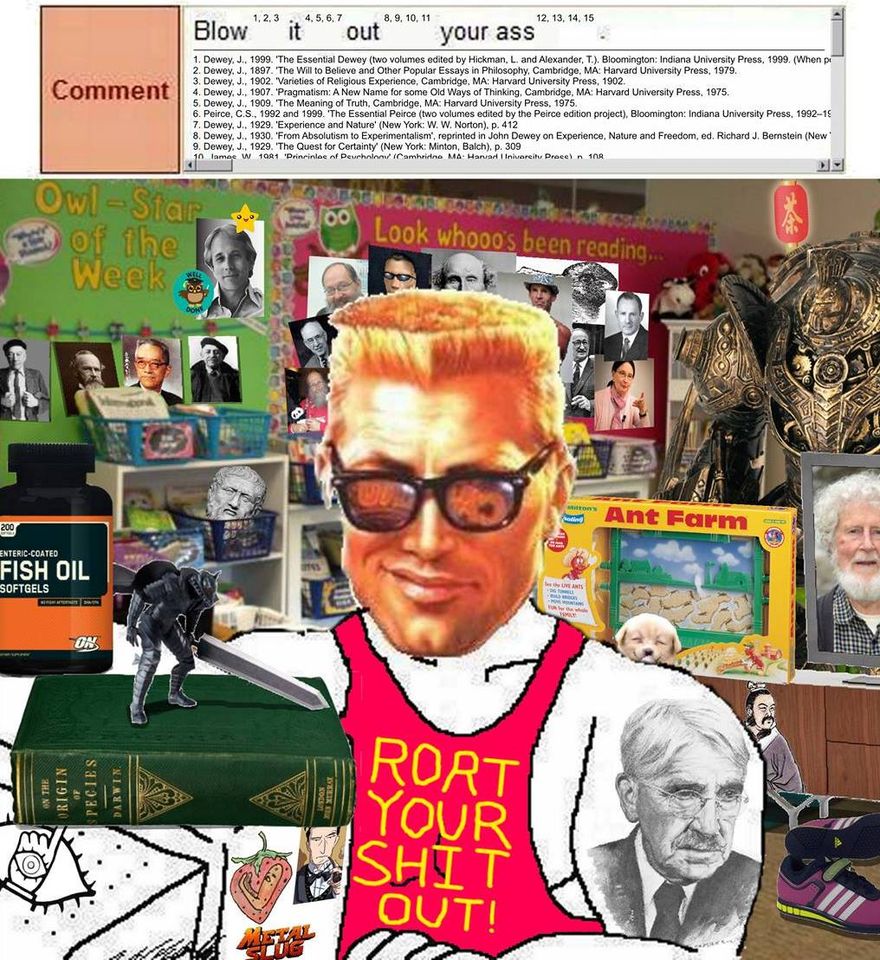 This Pragmatist Nukem meme we recently posted to TPM had been sitting around for some time, being occasionally edited. I had been adding more and more details to both sides of the picture until the image had dozens of references. I thought it’s great, kind of like those Pretty Princess Points pictures. But one of the other admins thought it’s overkill and distracts from the punchline of the joke. I didn’t trust my instincts because it did indeed seem that for someone seeing it for the first time, the image might be overwhelming. So we posted an earlier copy with sparse references on the right side, which still worked because it’s got this jacked dude (Duke Nukem) wearing a Chad singlet with a huge tattoo of some old guy’s face (John Dewey) living in a cave full of books (it’s a screenshot from Morrowind) with no decorations except a picture of another old dude (William James) on the wall and an anime figurine (Guts in Berserker armour) on his computer screen. Also he’s saying “Blow it out your ass.” just like in the old meme which is crack up. I still thought the crowded version (shown in the B-sides in the comments of the original post) was better, but I couldn’t figure out why. I went and thought about it, and came up with some insights.

The meme uses an old template. Everyone recognises it. Most users would also recognise Duke Nukem reference and the 4chan text box. More interestingly, it’s a classic format in the form of a two-slot comparison between two groups of users with labels above each depiction. It’s also aimed at a niche audience who has at least a passing idea of different traditions of philosophy (namely, the stereotypes for analytics, continentals and pragmatists).

This means that the friction of figuring out how to read the meme is lower for fluent readers. The high-literacy viewers enjoy picking out details and references they recognise; no viewer needs to recognise every detail in the picture. The last point is important: the meme means different things to different viewers as a matter of degrees, not a matter of either getting the joke or missing it, or reading it ironically or not. This makes the meme versatile, since a variety of users can enjoy the meme in different ways that best suits them.

Streamlining the content by minimising distracting details is the logical move if we understand a meme to be approximately a joke. Things distracting the viewer from the set-up and the punchline are redundant in a joke. But if we understand a meme as something between a diagram and a game, we can see that pruning away references and details is precisely the wrong thing to do in this situation. This is because although the joke remains fairly consistent between the original, the diagrammatic arrangement of the subcontents is so different that it ought to be considered a new template. The details in the background and on the characters themselves are analogous to labels on a board game’s playing field.