When You Drink [water] 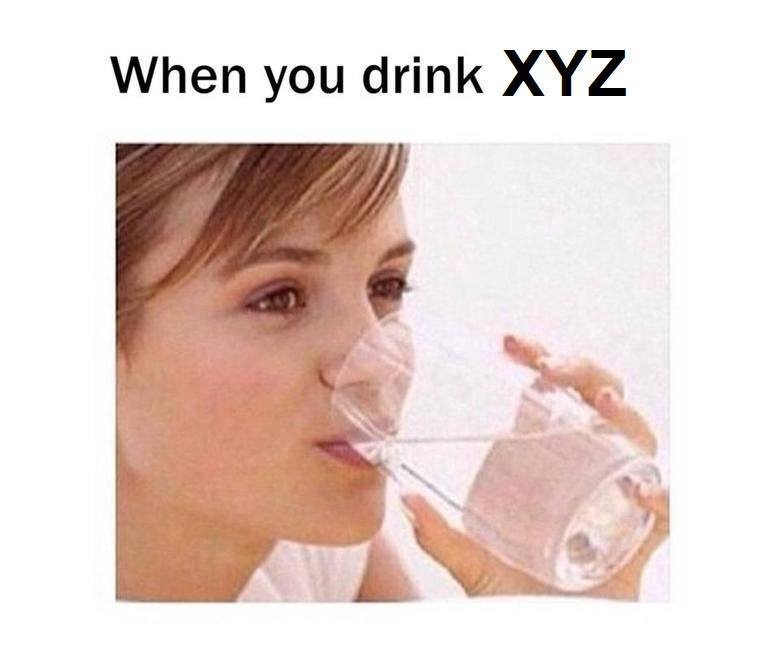 The first time I saw the source image for this meme was two years ago. The caption read: “When you drink water”. It was revolutionary for the time, when post-ironic memes were just beginning to develop. It’s very simple from today’s point of view, but that made it easier to understand how the meme works. The same image became popular in two niches:

(1.) Ironic memepages eager for new kinds of irony
(2.) Among normie Muslims during Ramadhan

The image is still one of my favourite examples of post-irony; it’s also my go-to example for the importance of context in memes. That the same image functions differently depending on context is trivial, but people often forget this when they look at a meme and ask: “Is this meme ironic?” It’s not a bad approach given that an image will always have a ton of clues about whether it is ironic or not; the contents of the image itself of course influences how it is used.

For example, the image in this post is only going to be popular with viewers who know about Putnam’s Twin Earth thought experiment, except in cases where XYZ is a synonym for something other than Twin Water (maybe Pokemon fans will pick it up, or someone will make a memepage called ‘XYZ are the best letters and A - W are the worst’).

Post-ironic memes are great because they are meaningful. Meaningful memes bring us closer to the dream of the timeless meme, just like early comics artists who aspired towards serious literature with an ostensibly unserious medium.

Tigran Dojyaan: What do you think about the troubling trend of each era of memes becoming shorter as creators try to outrun the normie plague by smothering more layers of irony onto their work? The lifetime of pre-ironic memes could span years, even a generation for some of the early ones. Now we have memes being spawned and burnt out in under two weeks. The post-ironic revolution was incredibly powerful but reddit is learning to traverse the pitfalls of irony faster than we can create them. What do you think this means for the future of exclusivity and freshness in memetic culture?

The Philosopher’s Meme: I think that the idea of what an ‘individual meme’ is has to change from intuitively recognisable units (e.g. a character like Pepe or a catchphrase) to accommodate for more than one level of memetic organisation. Think of it as memetic conservation; we need memetic biodiversity.

This is speculative, but I think a focus on the function rather than the associated symbolisms/iconography of the memes will lead us in the right direction. I think folkmemetic understandings of what a meme is has been changing in exactly this way, thanks to post-ironic memes. Some signs of post-irony are: a return to the classics; rejecting the idea that old memes are necessarily dead; lengthy narratives and rich lores; hybridity; widespread use of memes for specific, personal communication; the celebration of forced memes.

The answer isn’t to make memes harder to get for normies. The answer is to raise the memetic literacy so there are no normies left. We have to get to the Post-Normie Era.

Tigran Dojyaan: Those are astonishing ideals and I’m deeply intrigued by them. The current state of our culture is exclusive to foster an inclusivity for those who never had it, the dejected outcasts and mentally infirm we now identify as robots. You’re right about the purpose and structure of memes changing with post-irony. Doge-potion is an excellent example of reviving old memes and challenging the “old guard” mentality of the current meme culture. To see the rigidity of memetics gone would at least be an interesting experiment and might make this culture a much healthier one. However, the problem is extending literacy to normies. I’ve been trying to do this my whole life and it usually amounts to failure. I’ve tried exposing close family members and while they may understand the culture, they are unable to integrate or partake in it properly. With people outside the family it becomes nearly impossible to safely expose even the most open-minded and empathetic normie to our culture. The reason why is because this culture is founded on the experiences of robots and the underlying social repression and mental ailments that are not only deeply ingrained in, but integral to robot culture and, by extension, meme culture. How do we bring meme literacy to individuals, let alone the masses? This is the challenge we face when attempting to bring about the reforms you propose.