The Quadrant System for the Categorization of Internet Memes 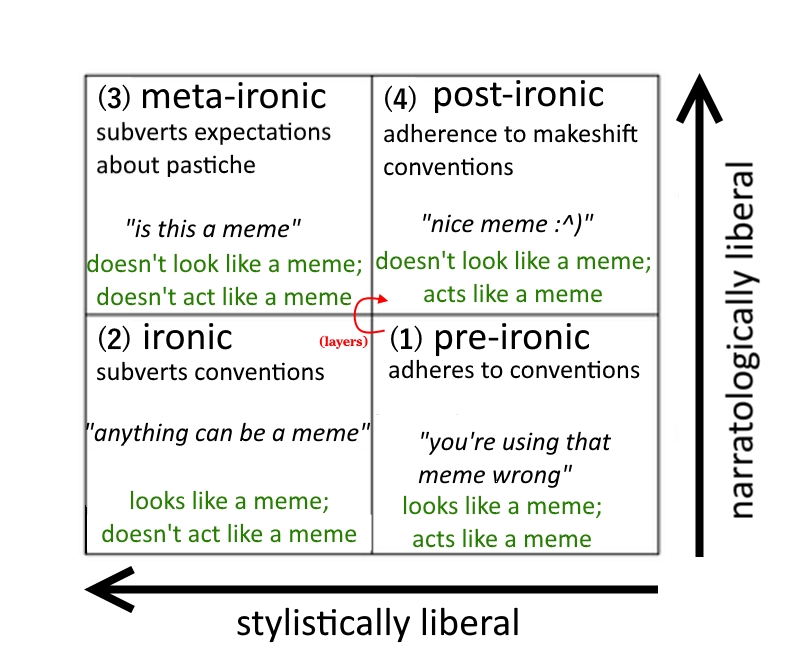 Memes are not just art; they are art-concepts, necessarily materialized cybernetically. This means their analysis must always be two-tiered: firstly, memetic; secondly, aesthetic. Thus the quadrant system must in its narratological and stylistic analysis be constantly referring back to pre-ironic memes, in their conservative and unchanging (by definition) forms, the Nietzschean struggle against which bore the post-conceptual art movement that is the ironic meme. Narratological libertarianism is not the same as the postmodernist diversity of subject matters—it is merely the descriptive deviation from the prescriptive conventions of the meme-medium at question. Stylistic libertarianism is likewise not a matter of the medium being modernistically parodied (viz. minimalist reiterations); it is to do with the degree to which the traditional style of the meme is, not traditional art such as modernist formalism. Therefore ironic memes are memes that were made ironically vis a vis meme-making itself (“ironically memeing”). Rather than ironic in content in itself (as modernist parodies tend to be, recognizable in itself as ironic), it is made necessarily ironic by its diversion from the pre-ironic memes against which they are functionally subversive. Thus meta-irony in memes explores the practice of meme-making and meme-consumption. It is both functionally against ironic memes and formally against pre-irony, rather than merely throwing that knowing wink [;^)] at the viewers as the post-ironic memes tend to (with their frequently meta-ironic subject matter) whilst nonetheless functioning as a meme should.