Here come the classic doom and gloom /biz/ memes, now that the meme stocks are peaking and crashing one by one. 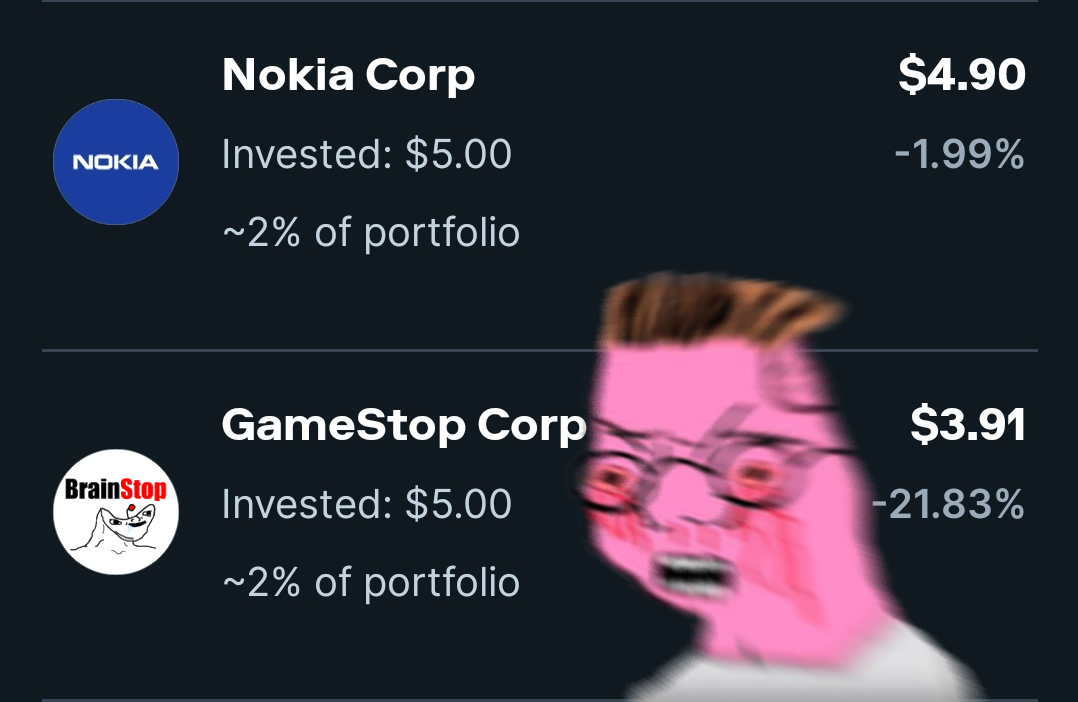 (I made this one, but you’ll find many more elsewhere.)

Big loser stocks always end up producing the best memes on that board. My hypothesis is that Reddit algorithm favours positive affect while posts with negative affect get the bumps on 4chan. Sorting by controversial on a subreddit seems to bring it closer to imageboards in this regard, but I haven’t seen any empirical verification of this.

Another reason I suspect that memes with negative affect tend to be better in quality on /biz/ is that people striking gold with their investment probably make fewer memes. I would wager that memes on the board are usually made by anxious investors either hoping their new positions go up so they can cash out, or those realising that they bet on the wrong horse. Also, /biz/ has a tradition of LARP posting as pink wojaks who lost their entire life savings on the latest catastrophe. This effect is (probably) further amplified by the fact that most people on the board lose money. It’s a demographic effect.

Speaking of demographic effects, an influx of Redditors flooded /biz/ and it was very noticeable that many posters were new to imageboards. The way this was interpreted by the board was almost totally dependent on how well WSB meme stocks were doing at the time: while they were on the up, FOMO, both in memes and money, drove some of the channers to be positive and welcoming; after they started crashing, they turned on the Redditors very quickly and began to reject them again.

One indicator of this response was is that antisemitic conspiracies, about Jews manipulating the meme stocks to keep them from reaching infinite price heights, suddenly became extremely unpopular on the board. WSB became equated with the new Q and, as an extension, so too did posts about Jewish conspiracies being behind the price drop. Further, the way that the HODLers are dealing with the crash, by doubling down on their investments and crowdsourcing speculative explanations for unfulfilled prophecies, resemble the increasingly desperate and far-fetched Qoomer cope theories such as a “shadow presidency”.

A central theme of post-2015 memecultures was the gamification of memes. This gave rise to Facebook memepages as well as a “meme president”. Post-2020 memecultures now struggle with the challenge of the cope, which is an inevitable consequence of creating new games with a loss condition. That is, what do you do when trusting the plan and forcing the meme doesn’t work? My answer is to question the memetaphysics of the memetic games that you play. Chances are, the success of the memes are determined by who wins more than the winners are selected by the memes. The memes merely keep the books.

At the same time, memetic game designers are drawn to phenomena which really can be influenced by memes, such as stocks and politics. As the normies learn about memes, subculturalists are also learning about the mainstream. The gap is ever narrowing, and eventually will cease to exist. What happens then? The existence of auxiliary memetic games will be the ubiquitous norm for anything that is amenable to being memed, whether it be a community, a product, a person, or a word. It’s only at this stage that the fantasy of meme magic will become reality, as the existence of memetic games begins to not only imply the existence of corresponding meme-objects but provide new niches within which that meme-object may develop and survive.