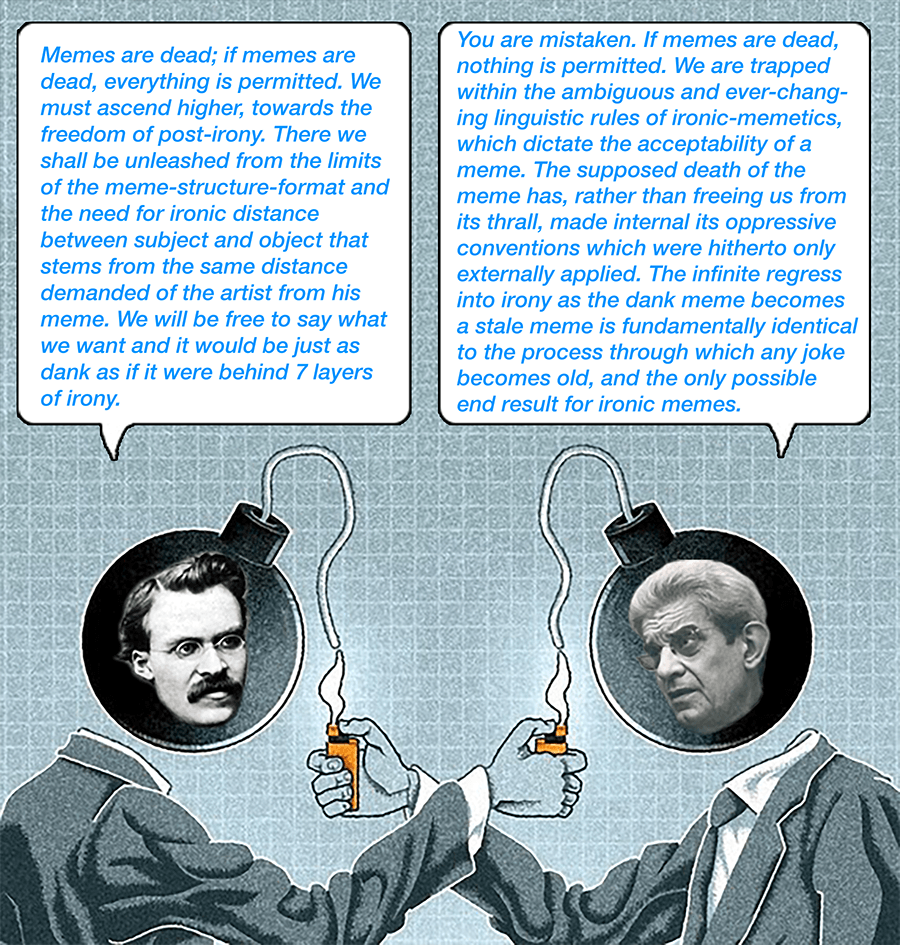 We first posted this image in July of 2015. The idea behind the mutually-assured-destruction dynamic between the two nerds in this image was that they are, themselves, part of a meme (i.e. the ‘memes are dead’ paranoia meme). The more they discuss it, the faster it will die.

The Ironic Meme Movement was a reaction against the mainstream co-option of the subcultural products of the underground; an attempt to create incorruptible inside jokes. The Ironics employed defensive strategies which paralleled that of the punks against the commercialization of their own subculture. Like the punks, they failed. For Ironic memes, as for mohawks and radio-unfriendly lyrics, it was only a matter of widespread familiarization (i.e. normalization) before the mainstream could safely absorb (i.e. normify) them. In response, the radicals of the movement took the logic of ironic memes to its extreme, pre-emptively subverting ironic memes before co-option could occur in order to outpace the process of normification.

This often automatized process intentionally destroyed meaning and cannibalized meme-formats with deliberate disregard for narrative. The race for ever-increasing obscurity resulted in complex creations such as animated meme-fractals, but every lineage of meta-ironic memes proved to be an evolutionary dead end as incomprehensibility prevented further reincorporation into subsequent generations. Soon it became clear that the self-defeating, scorched-earth strategy of meta-irony had failed, and the project was abandoned by the community. All that remain are technical gimmicks developed during this period of skepticism and experimentation.

The Post-ironic Meme Movement continued to grow in the same niche, now richly fertilized by these projects’ spectacular failure to create the simulacra-barren meme. Previous anti-cooption strategies operated under the assumption that the function of memes was to faithfully carry incorruptibly-encoded messages into other spaces, but post-ironic memes conceded this impossibility and instead became the locus around which makeshift spaces of sincere subcultural exchange could occur. Whether the memetic objects could be misused, co-opted or commercialized became a non-issue: the real value of the community was recognized as something that could not be stolen merely by copying.

At the time we created this meme, there had been isolated attempts at post-irony, but the meta-ironic avant-garde was just beginning to make radical progress both in theory and practice, and hence dominated the artistic conversation. We weren’t sure whether post-ironic memes would prevail—unsure, but hopeful enough to express it in a manifesto.

In the end our predictions proved self-fulfilling with the development of Gondola, a meme which prioritizes sincerity and beauty as a part of its ethos. The mere armless bear form of a Gondola is not the meme. Its true meaning hovers in the space between the image and the comment—the community’s interaction with it—and cannot be extricated or sold piecemeal. Gondola and its philosophy of wu wei made post-irony practicable and proved immune to deliberate attempts at normification that would have been death sentences to any other meme.

Selected comments from the page

Oskar Lindblom: Memes are almost by definition a linguistic phenomena: there is a certain syntax, a grammar of rules of how to speak and act in order to be recognized as part of a certain meme. Even such subversion of rules will ultimately be codified: one must break the rules in a specific, rule-bound way. I remember somebody once doing a long post about the grammar and syntax of doge and dat boi speak.

Gondola seems to not transcend but miss all of this. Gondola doesn’t speak. Doesn’t interfere, unless hopelessly drawn into something. Gondola doesn’t linguistically attack you verbally like the Spurdo or any other meme does. Gondola doesn’t plant its seed in your mind through language like other memes do. Gondola is an invitation, not an invasion. It merely invites you into the aesthetics of the meme, and doesn’t impose it upon you.

This is why Gondola is so normie-resistant: aesthetics takes work on the part of the reader. One cannot simply let it colonize oneself and then spout that shit onwards in another direction. If one tries to hasten the process, then it becomes uninteresting. Gondola is an invitation that will keep on giving as much as you put into it. You watch into one, and He stretches a leg to you, you grab it and plunge into that world for a while. It might be beautiful, but one cannot put into words. It will never be repeatable once one climbs back out from the rabbit hole.

Sam Tannert: “Gondola is an invitation, not an invasion.” HOT HOT HOT

Thomas Whitaker: Memetic nativism must be maintained in order to ensure quality content.

Those that come from and fall into mainstream culture are of a lesser quality and it is the destiny of those that keep to the subculture to dominate and deride them.

Finn Anton: Gonna have to go with nietzche on this one, Sincerity is now the most potent form of irony

Mike Huttner “Every elevation of the type “man” has hitherto been the work of an aristocratic society — and so it will always be: a society which believes in a long scale of orders of rank and differences of worth between man and man and needs slavery in some sense or other. Without the pathos of distance such as develops from the incarnate differences of classes, from the ruling caste’s constant looking out and looking down on subjects and instruments and from its equally constant exercise of obedience and command, its holding down and holding at a distance, that other, more mysterious pathos could not have developed either, that longing for an ever-increasing widening of distance within the soul itself, the formation of ever higher, rarer, more remote, tenser, more comprehensive states, in short precisely the elevation of the type “man”, the continual “self-overcoming of man”, to take a moral formula in a supra-moral sense. As to how an aristocratic society (that is to say, the precondition for this elevation of the type “man”) originates, one ought not to yield to any humanitarian illusions: truth is hard. Let us admit to ourselves unflinchingly how every higher culture on earth has hitherto begun! Men of a still natural nature, barbarians in every fearful sense of the word, men of prey still in possession of an unbroken strength of will and lust for power, threw themselves upon old mellow cultures, the last vital forces in which were even then flickering out in a glittering firework display of spirit and corruption. The noble caste was in the beginning always the barbarian caste: their superiority lay, not in their physical strength, but primarily in their psychical — they were more complete human beings (which, on every level, also means as much as “more complete beasts” —).” -Nietzsche

Eoin O’Connor: This is some epic trans-meta-post-alter-postmodernist shit, yes.

Removed by request of author

We forced a bot to read Phil101 essays