Last updated Jan 18, 2016. A new glossary is being prepared; much of the following material is outdated!

Participant in the underground meme scene. A poster, fluent in the associated linguaculture, who is able to recall (memorization of content), reproduce (emulation of style) and reference (intertextual affectation) memes. Though frequently used to describe posters lacking in social graces -- often self-deprecatingly -- this specialized term is useful in its conceptual opposition to ‘normie,’ as well as its evocation of particular thinking and speaking patterns found on the autism spectrum.

Slightly more Complex memes; requires a prior base familiarity with some Pre-Ironic lexicon since the subversion of conventions is the primary source of its humor. Eventually begins to regress into the same behaviours as Pre-Ironic memes (see ‘the decay to the meme’), which is the solidification of common practices into normative convention. This process is often referred to as ‘normification’ or ‘normies stealing the memes’.

A subgroup of autists; insiders to the Ironic meme scene. Originated from 4chan but now largely centred around Facebook meme pages and groups. Associated with the lineage of ironic, meta-ironic and post-ironic memes. Their self-identification as social misfits, developed in reaction against normies, popularized the terminological dichotomy of normies and autists.

Complex memes that prey on less complex memes; forms the same relationship with the meme(s) it derives its humor from as Ironic memes do with Pre-Ironic memes. They violate the structural conventions of the memes they reference. They often fall into an infinite regress of successively more ‘meta’ memes that make fun of slightly less Ironic memes, ad infinitum unto incomprehensibility, when the normalization process cannot keep up with the rate of deconstruction.

The process through which a meme is altered from its previous copy. It can be accidental such as in the case of misspelling or misuse, or deliberate such as in the case of Ironic memes; a primary mechanism through which memes evolve. It is far more frequently beneficial to the meme’s survival than random mutation is to genes. The Underground exerts a slightly stronger pressure towards this than towards Normalization.

Violation of conventions regarding the plot, themes, or message of a meme. The joke is about the content, as opposed to format.

The process through which a component becomes accepted as ‘normal’ in a given culture. Commonly referred to as “becoming a meme”. Conventions which emerge organically solidify into consistent styles and take on a normative character (i.e. become grammatical rules). Both Underground and Mainstream memes develop through this process of popularization which makes an initially novel component conventional. The Mainstream exerts a much stronger pressure towards this than towards mutation.

An outsider to the underground meme scene. A poster who is uninitiated, uninvested, and stylistically uninformed. Though most recently associated with the posters of pre-ironic memes, the term was originally used by Internet denizens to describe well-socialized, “healthy” people in opposition to Ironists who self-identify as social outcasts.

Alternative spellings: “normalfags,” “Norman,” and other derivatives of “normal”

(Not to be confused with Normalization.) The process through which all complex memes constantly regress towards Simplicity; the decay to the meme. As a meme becomes popular with those uninitiated to its cultural nuances, Simple mutations which only superficially obey the stylistic conventions begin to overtake more Complex pieces of the ‘same’ meme. An example is the way Ironic memes lost their initially subversive function and began to behave in much the same way as Pre-Ironic memes, thus making ‘Ironic memes’ a Pre-Ironic meme in itself.

Highly Complex memes that reconcile Pre-Irony and Irony. Instead of outright violating established conventions, the narrative works with the structure in an internally consistent manner. They vary in meaning depending on whether the observer is familiar with Ironic meme culture or not, and simultaneously convey two layers of meaning. Unlike in the case of Ironic memes, it is not irony (i.e. meaning the opposite of what is being said) that is missed when the viewer lacks familiarity with the tropes involved. What you see is some of what you get–but not all. Numerous factors such as the history and associated nuance related to the meme’s stylistic choices can be taken into account to add nuance to the meme. The locus of humor in post-ironic memes is what sets it apart from simpler memes: the absence of ironic subversion. The viewer requires a broad knowledge of the memetic lexicon, especially regarding ironic memes, in order to fully appreciate post-ironic memes. A simple rule of thumb for the identification of post-ironic memes is whether the humor is in what is being left undone or unsaid; this makes them more complex than other memes, as well as resistant to normification.

Simple memes; popular objects making up the lexicon of reference humor–what you see is what you get. They do not rely on the violation of memetic conventions for their humor. The majority of ‘normie’ memes fall into this category. They are highly normative and stress the importance of ‘using the meme right’.

Slightly complex memes that reference themes and ideas rather than other memes themselves. They differ from Neo-Traditionalist memes in that they isolate the narrative of another meme to reference. Effectively Internet inside jokes. (explain how these involve much more artistic license and freedom from restrictive formats, but doesn’t quite go as far as it)

The size of the system of related memes referenced by a particular meme. Insofar as a meme exists within a network of other memes and relies on those other memes for much of its meaning. Despite being an object in its own right, the majority of its meaning is not derived directly from its actual visual composition but the numerous other memes (i.e. other classes of meme-objects) which it denotes and the poster references. An important point of note is that the majority of references on which the full meaning of a meme depends is not even indirectly pointed at by any given meme. The observer must be already familiar with the system within which the meme operates, through observation or participation within the respective memetic languaculture.

Deconstruction of the relationship between the meme and the convention of its genre through deliberate misuse (viz. a criticism of formulaic conventions in Ironic memes). Structural subversion questions the concept of convention and in doing so violates the process of normalization itself rather than any particular convention. This is a violation of conventions regarding conventions and treats rules as either ‘normal’, something to be followed (anticipated punchline), or broken (unexpected twist) for humor. Meta-Ironic memes thus bring into question the way even subversive humor becomes normalized and subject to rigid conventions–and ultimately attack the principled divide between Ironic and Pre-Ironic memes. In Post-Ironic memes, this same kind of subversion manifests as a tacit knowledge regarding nebulous conventions which emerge and overlap between different kinds of memes. Separated from narratological subversion, structural subversion can function like a play on words taking advantage of ambivalence in meaning within a meme.

Violation of conventions regarding the visual elements, graphic structure, presentation, and manner/rhetoric of a meme. The joke is about the format, as opposed to content. 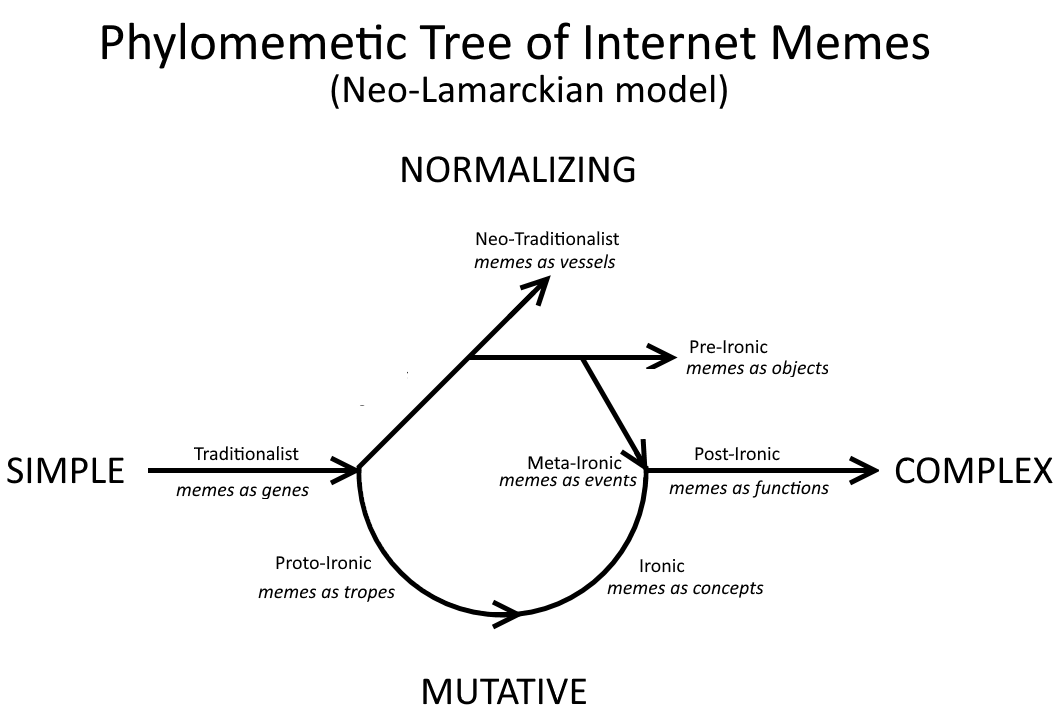 The Phylomemetic Tree is a diagram showing the evolution of Internet memes from their inception as emoticons and chain e-mails through to increasingly complex forms such as baneposting, with a focus on the effects of their divergence into the mainstream and underground.

The Quadrant of Ironic Memes 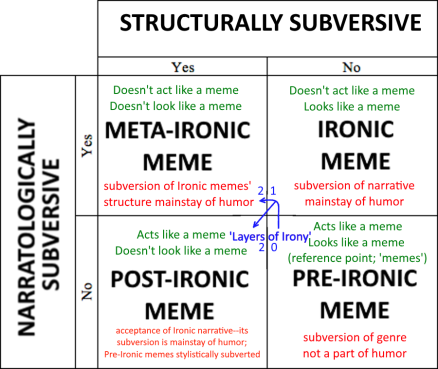 The Quadrant is a system aimed at the practical, easily applicable classification and analysis of Internet Memes, with a focus on the inherent tension within ‘Ironic’ memes.

The most basic kinds of Internet memes; single cultural units which are copied and reproduced, such as emoticons, viral videos and forwarded chain e-mails.