The new year mood is bringing in new memes, aside from the obvious memes about things that usually happen during new years. Here’s an example of a meme with that new year mood which doesn’t directly mention the new year. 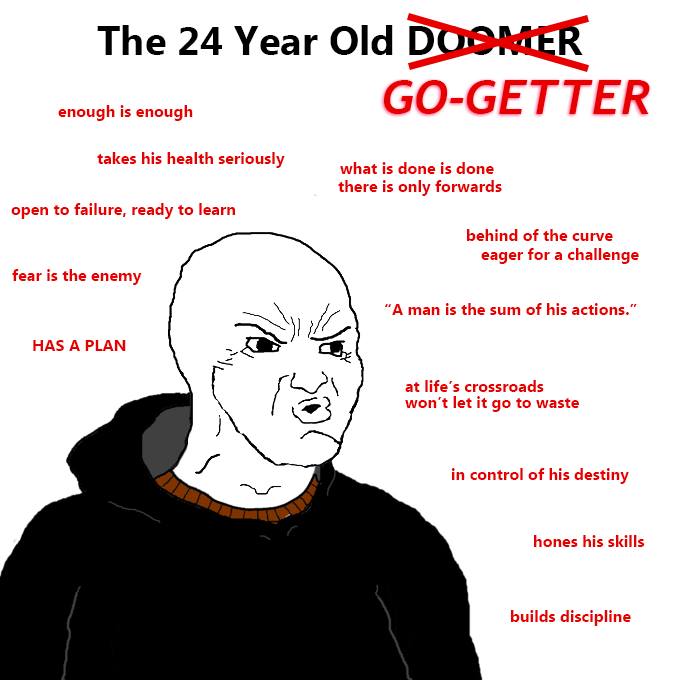 The age of the ex-doomer Wojak has been changed from 23 to 24, as the character develops with the shitposters IRL from 2018 to 2019. Memes are made by shitposters that live in the meatspace, which makes them affected by human schedules. It’s a trivial point, but the schema of memes as semi-independent entities that float around on the sea of the Internet is too popular for this point not to be insightful.

As Jeremy points out, you can predict meme cycles based on things like news cycles and holiday schedules for teenagers who can afford the time to shitpost more. In this way, memes are not always the thing that causes broader social changes but rather act as ‘bookkeeping’ elements, in the same sense as Wimsatt’s ‘genetic bookkeeping argument’, in which genetics is most useful as the study of readily identified markers of the evolutionary process. According to the bookkeeping argument, the study of genes helps study biological evolution as the former ‘keeps the books’ for the latter. The same idea could be applied to the study memes. Memes frequently influence the way people think, but it’s more often that it reflects the way people think. Edgy teens and deepposters love ‘meme magic’ and ‘hyperstition’ but what they identify as meme magic and hyperstitions are usually just hypostitious detritus shed by culture as it grows.

A tangential just-so story that comes to mind is that this might answer the question of why Australians shitpost so hard. Perhaps it’s so hot in Australia when the other major posters of the world are freezing their asses off, which further buffs their timezone advantage which lets them post when the mods are asleep. Using the computer is also a decent option when it’s hot and you can’t sleep, and so more Australians are driven to shitpost during the summer holiday seasons when it’s pertinent to shitpost in a concentrated burst. Memes are often born through concentrated bursts of activity and stick around through steady reposts thereafter, which might contribute to the greater perceived magnitude of the Australian contribution to shitposting.

People also think and feel differently depending on the climate, and so the climatically segregated Australians probably developed a different psychological and social niche that was cemented into a small subculture with the help of identifying features like the flags on chan boards or their slang. Similarly, the Finns seem to have produced so many weird memes because of their living conditions are cold, isolating and awkward. In particular, their memes are often parodies of memes from English speaking subcultures, such as Spurdo or Gondola, which both originate from Ylilauta. The ease with which the Finns localise foreign memes might partly be explained by their history of linguistic tension with the neighbouring Swedes.

As I write, it is so hot here in New Zealand that I couldn’t sleep until two in the morning when it cooled down, and kept waking up even then. Things like that probably have a psychological impact that translates into the behaviours of people who get up and shitpost all day anyway, in ways that have yet to be measured by social scientists because their social ontology doesn’t include ‘shitposters’. Some might object to the coinage of new social ontologies, and argue that ‘shitposting is not real’, but common cultural beliefs and practices are cultural habitats for memes. It doesn’t matter whether shitposting is a truly distinctive category of practice yet, because the shared perception around the notion with all of its attendant social mores makes it into a distinctive category of practice. A calendar system is a good example of a cultural habitat, and many memes live and die based on the Gregorian calendar or the lunar calendar, or just go dormant until next year. Speaking of which, the 4th of January is World Braille Day. Happy new year, and here’s a shitpost from me in advance: