For this week’s event, we watched a few episodes from North Korea’s first animated series, ‘Squirrel and Hedgehog’. It’s hugely popular in North Korea; ‘Squirrel and Hedgehog’ originally ran from 1977 to 2005, but resumed production in 2006 due to popular demand. It is currently on hiatus while the studio works on another series called ‘The Boy General’, a historical series about the kingdom of Gogureyo, one of the Three Kingdoms of ancient Korea. 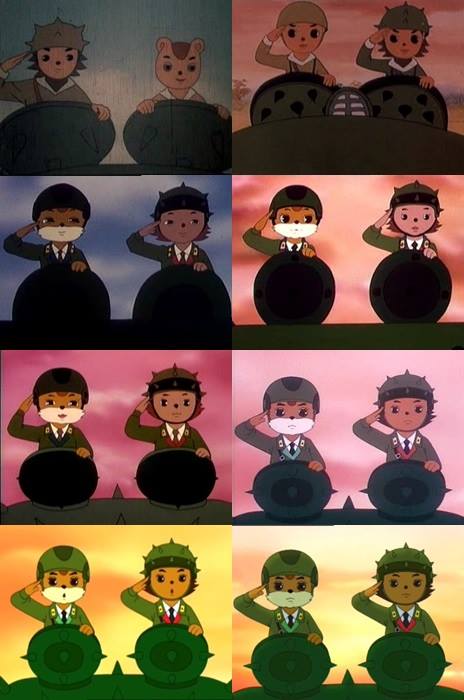 Picture 1 shows the opening sequence over the years. ‘Squirrel and Hedgehog’ initially used cel animation like classic Disney; then it was made digitally from 2004; it finally moved onto an Adobe Flash based production in 2008. 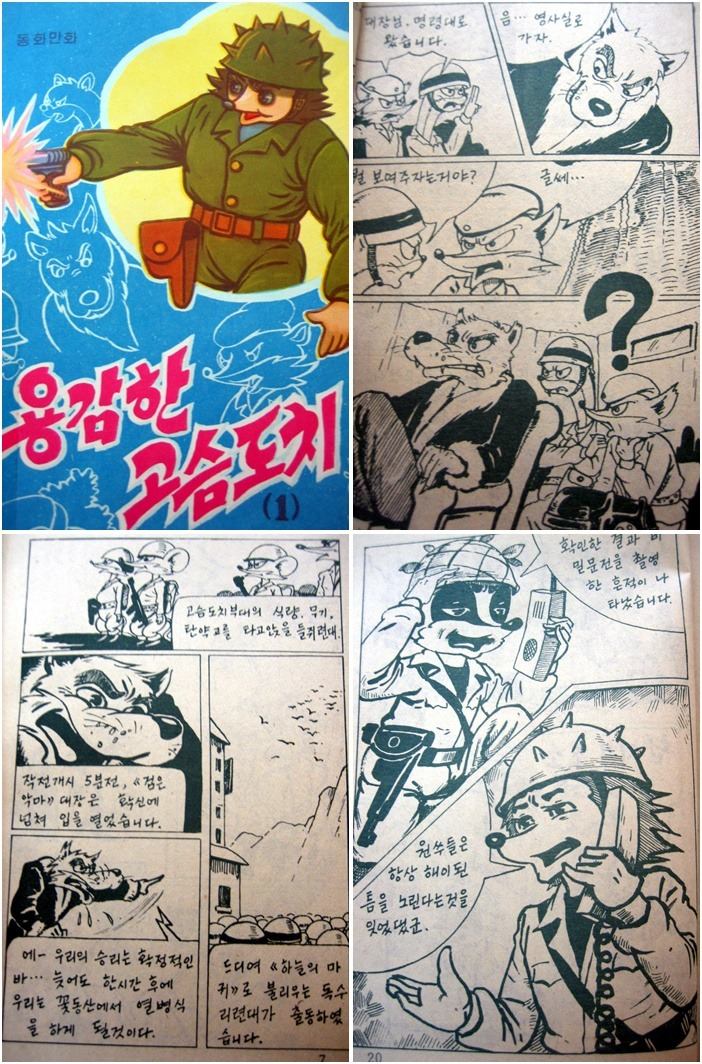 There is also a comic book published in 1991, shown in picture 2, but I could not find it. If you do, please post it here.

The stylistic changes over the decades reflect not only the available technology at different periods, but also political and historical events, such as the Arduous March affecting the animation quality of the episodes during the 90s or the way the episodes introduced anti-American/anti-Japanese elements later on.

The foreign influence in animation tropes becomes just as noticeable as the stylistic change when older episodes are watched side by side against recent episodes. Later episodes are full of exaggerated movements for comedic effect such as ‘The Glass Smack and Slide’ gag or a telephone jumping up and down to show how loud it’s ringing.

These later episodes look quite similar to Western children’s shows, but the amount of violence in action scenes and the themes in general make the series feel closer to anthro animations aimed at mature audiences like Cat Shit One (Apocalypse Meow). Such Western animations tend to use the cuteness of the animal characters as a foil to emphasise the brutality the themes; ‘Squirrel and Hedgehog’ use the different kinds of animals as an allegory, where the pure and innocent animals of Flower Hill stand in for North Koreans fighting against the “sworn enemies” who aim to destroy their happiness.

The reason that one of the highest-quality animated series in North Korea features anthropomorphic squirrels and hedgehogs can be traced back to the establishment of the 4.26 Studio, which produced the series. The studio was established in 1957 under Kim Il Sung’s orders that North Korea “must produce animation for children at all costs”. 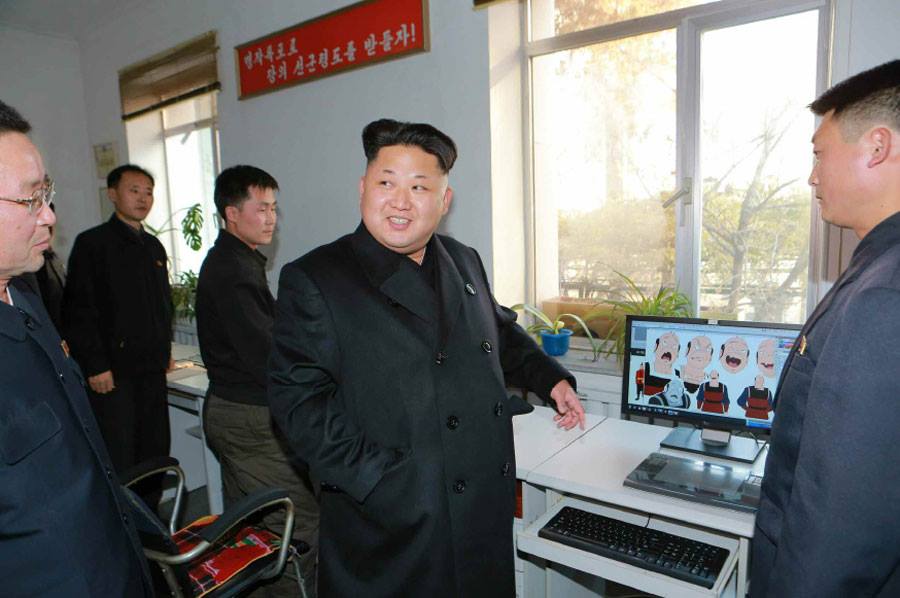 In 1975, the studio won the second highest honour after The Hero of the Republic: the Korean text you see at the end of all of the episodes reads, “Joseon 4.26 Animated Films Studio, winner of the Kim Il Sung Medal”. You can see in picture 3 Kim Jung Un visiting the studio in 2014.

However, Kim Il Sung had also made a disparaging remark about animations about real people, suggesting that “the most sophisticated animation cannot rival the sophistication of human action”, and that the limitations of the medium pose the risk of distorting reality. This made it dangerous for North Korean animators to depict humans, especially soldiers, except in cases of historical figures. The North Korean animators therefore opted to focus on anthropomorphic characters and historical drama; consequently, most of the high-quality animation from North Korea features anthropomorphic characters.

It’s interesting to think about how artists have always had to come up with creative ways of evading the wrath of the powerful: Montaigne could not directly criticise living rulers and aristocrats, so he discussed historical figures who rode around on extravagant chariots pulled by lions or carried by humans, and let his readers draw the inference; naturally, the animals of ‘Squirrel and Hedgehog’ stand in for humans.

The anthropomorphic character design of ‘Squirrel and Hedgehog’ blends together human elements with animal stereotypes. This works very well in favour of the propagandist: the field rats who stand in for the common South Koreans, ruled over by the Weasel elites, are small and innocent like the squirrels, hedgehogs and ducks of the Flower Hill but have been corrupted by greed and cowardice: the North and South Koreans are people of the same blood, after all. The wolves on the other hand are the Western imperialists who are larger but dumber and weaker than the Koreans.

The juxtaposition of this overseas cult following against the political context is humorous. During the late 90s to the early 2000s, the North-South relation improved under Kim Dae-Jung as president of South Korea. This led to a greater spread of South Korean cultural products in the black market in the North, weakening the effectiveness of North Korean propaganda which claimed that the South was full of starving children eating from trash cans and getting shot down by bored US soldiers. The North consequently switched their internal propaganda tactics that emphasised the fact of alienation experienced by deserters from the North and the ever-growing trend of polarisation between the rich and poor in the South.

‘Squirrel and hedgehog’ reflects the change of how the audience thinks in the North: the North Koreans are soft and small animals pure of heart and brave, protect their happiness through superiority of character, rather than by just being more prosperous; their Enemies are cowards, led by greedy weasels or a short tempered wolf and a soft-dom fox lady. It’s delightful how watchable it is outside of the original context, which should perhaps be a little worrying, but the furries make it all but impossible. 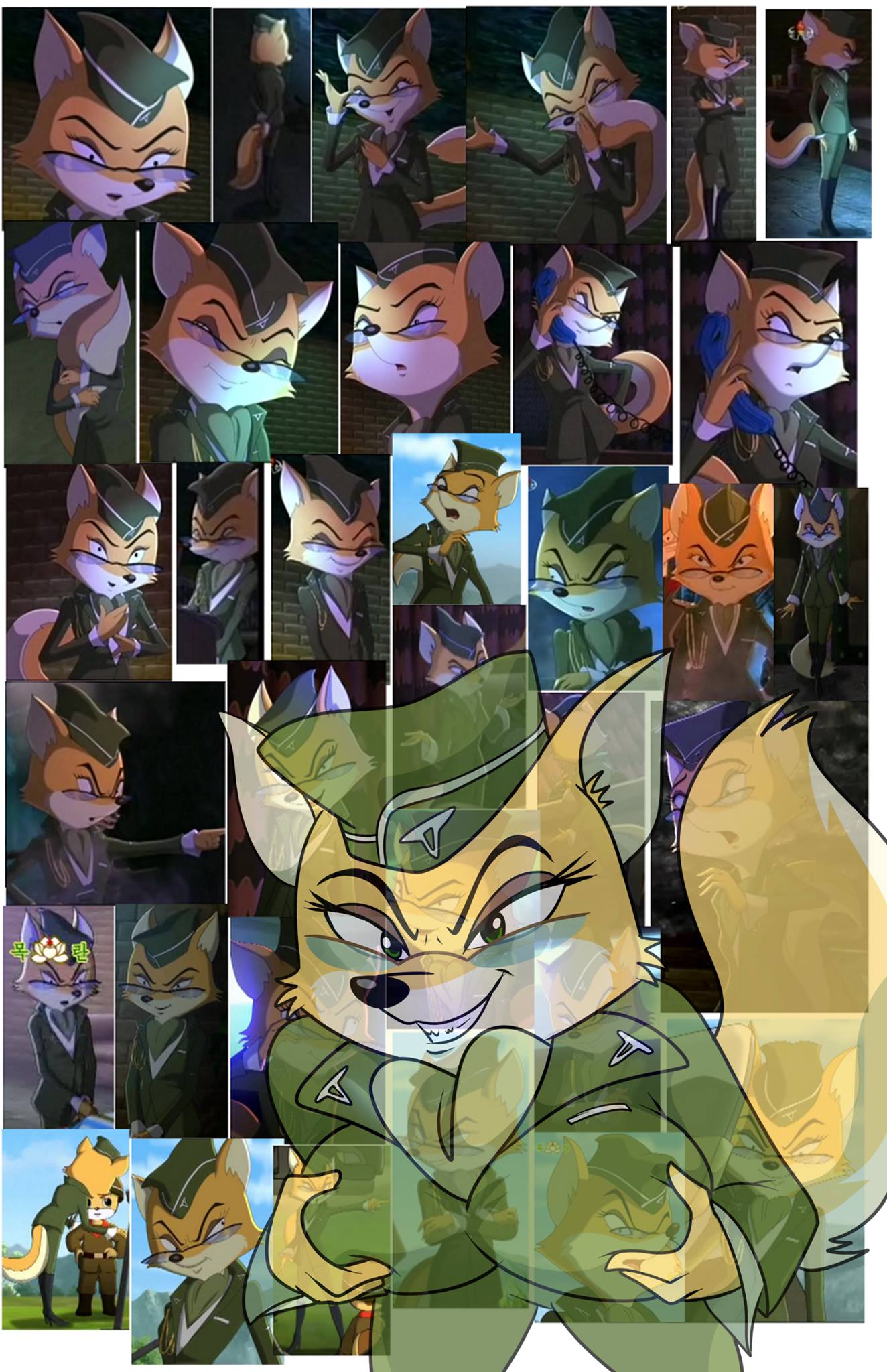 Moe to Memes, Otaku to Autists

A Tale of Two Healthcare Narratives